Implants are small titanium threaded cylinders, which are inserted into the jawbone where teeth are missing. These metal anchors act as the tooth root (the portion of the tooth beneath the gum). They are surgically placed into the jawbone. A small incision is made in the gum tissue and a series of small drills are utilized to create a small hole in the jaw where the titanium screw can then be placed. The bone bonds with the titanium, creating a strong foundation for artificial teeth. 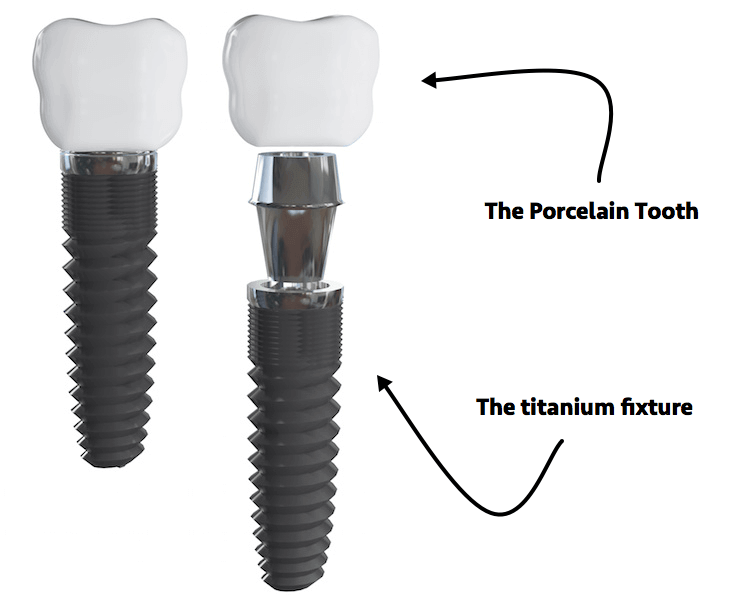 A small post (abutment) is then screwed into the implant. The abutment is the part of the device that connects the implant beneath the gum surface to the crown which is above the surface. The crown, or the portion of the tooth that you see when you smile, is either glued or screwed on into position. When implants are done well, there is no way to tell if it is a natural tooth or an implant unless a radiograph (Xray) is taken. Surgery can take between one and two hours per implant.

There are two main techniques for placing implants – a stage one or a stage two surgical technique. As the name suggests, one is performed in a single step while the other requires a second surgery.

With a stage one technique, a connector that attaches the implant from the bone into the mouth is placed. As previously mentioned, this is known as an abutment. Following a three (3) to six (6) month healing period in which the implant fuses to the bone, a crown is placed on the implant restoring the immediate appearance of a healthy, normal tooth.

With a stage two technique, the implant(s) are placed into the jawbone and the gum tissues cover them. The implant(s) are not exposed to the mouth, rather they stay buried and are left to heal. Once healed, a second surgery is performed to attach an abutment for securing the crown in place. This approach is most commonly used when there is poorer bone quality or quantity.